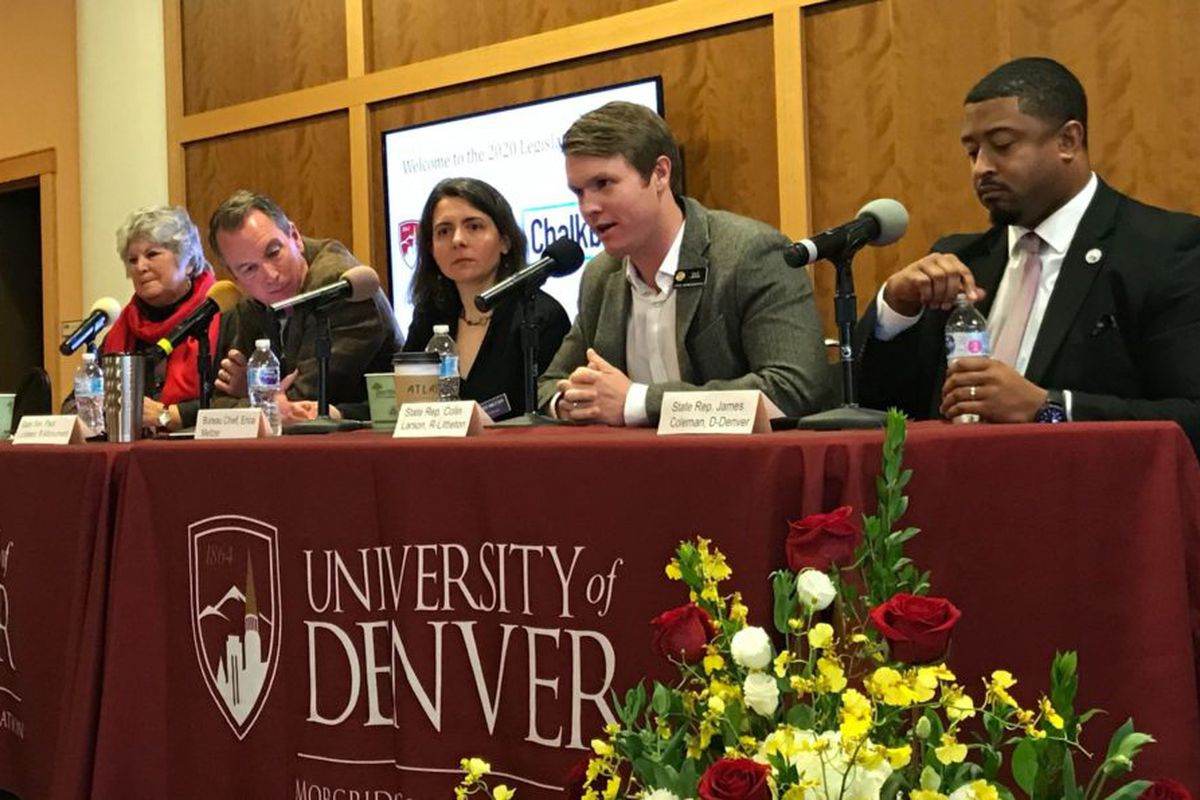 The Colorado General Assembly reconvenes Wednesday. At Chalkbeat’s annual legislative preview, two Democratic and two Republican lawmakers laid out their education priorities, expressed caution about Gov. Jared Polis’ proposed preschool expansion, and agreed that equity needs to be a driving principle behind education policy. They also grappled with how to divide an education funding pie that isn’t likely to get much bigger in the immediate future.

The four lawmakers on the panel were:

Here’s what we heard:

Lawmakers have heard from Colorado voters loud and clear: No new taxes for education.

Voters in November rejected a ballot measure to increase school funding, called Proposition CC. The defeat was the latest in a long line of similar rejections.

Voters, Larson said, “have absolutely no faith that if we dump more money into this system, we’re going to get anything other than a bunch of excuses and asks for more money.”

Given that, Larson and Lundeen said lawmakers need to find a new way to divide the school funding pie, with the goal of boosting student achievement and building voter confidence.

“In order to change the way the voters perceive what’s going on, the policymakers need to lead with evidence of a new approach,” said Lundeen, who along with Larson opposed Proposition CC. “Following that, I believe the political winds shift.”

But Todd, who supported CC, likened drafting a new school funding formula with the same amount of money to “rearranging the deck chairs.” A special committee charged with changing the outdated formula announced Thursday it would not recommend any legislation in 2020.

Coleman said he hopes to remove barriers preventing teachers of color, in particular, from becoming licensed by reducing the cost for teacher licensure exams.

Colorado teachers do not have to be licensed to teach in charter schools. But Coleman said licensure “increases the avenues you have to work in the teaching profession, and it also can increase your pay.” The average charter school teacher in Colorado earned $42,190 last year, while the average non-charter teacher earned $56,891, according to state statistics.

Todd said improving Colorado’s teacher preparation programs is a top priority for her this year, her last in the state legislature. She plans to run an omnibus bill that brings together a range of teacher training programs under a single umbrella and allows for more flexibility in the use of stipends and grants. But she said she also plans to revise a new law she championed last year that requires teaching candidates to spend a year as a student teacher.

Jeremiah Blaha, the director of student teaching at CSU-Pueblo, who was in the audience, pointed out some of the flaws of the yearlong mandate.

“It’s destroying my undergrad teacher prep program,” Blaha said. A yearlong stint as a student teacher, he said, is something his students living in poverty “just cannot manage” financially.

Todd pledged changes, perhaps in the form of a stipend for student teachers or flexibility that would allow them to do their student teaching in smaller blocks of time.

School accountability is here to stay.

A Denver teacher in the audience asked about a legislative solution to end the practice of closing low-performing schools or turning them into charter schools, which he said is traumatizing to the students who attend those schools.

But there was little appetite among the four panelists for changing a state accountability system that allows schools with low student test scores to be closed. (The State Board of Education has not recently closed any schools, but the Denver school board has.)

“To the underlying question of, ‘I’ve got a failing school, so I want to keep it open,’ I reject that,” Lundeen said. “The answer is, we need to hold ourselves accountable.”

Lawmakers want to see school funding distributed in a more equitable manner. But if some students get more money, that means others will get less.

Without new money, changing the funding formula is sure to create winners and losers. All four panelists spoke about equity, but they emphasized different groups that deserve more funding.

Larson mentioned students who attend charter schools authorized by Colorado’s Charter School Institute, an agency originally set up to approve charter schools in districts philosophically opposed to them. Because Charter School Institute schools don’t belong to any district, they don’t get a share of any extra tax money collected by the districts.

Coleman talked about equity for students like those from far northeast Denver, which he represents. “We got kids who are coming to schools dealing with a various array of issues, and sometimes we don’t do our best at addressing those issues before we begin teaching,” he said.

Some students come to school hungry, Coleman said. Others are affected by gun violence.

Lundeen noted that the current system also produces winners and losers, as districts with higher needs already do not receive appropriate funds.

All four panelists said preschool is important, but they also expressed reservations about how the state would pay for expanding it given the funding landscape.

“I support increasing preschool opportunities,” Todd said. “I am leery right now of trying to figure out where that money is going to come from.”

“I just don’t see where this is a realistic request this year,” Larson said.

The article was published at Five things we heard at Chalkbeat’s 2020 legislative preview.