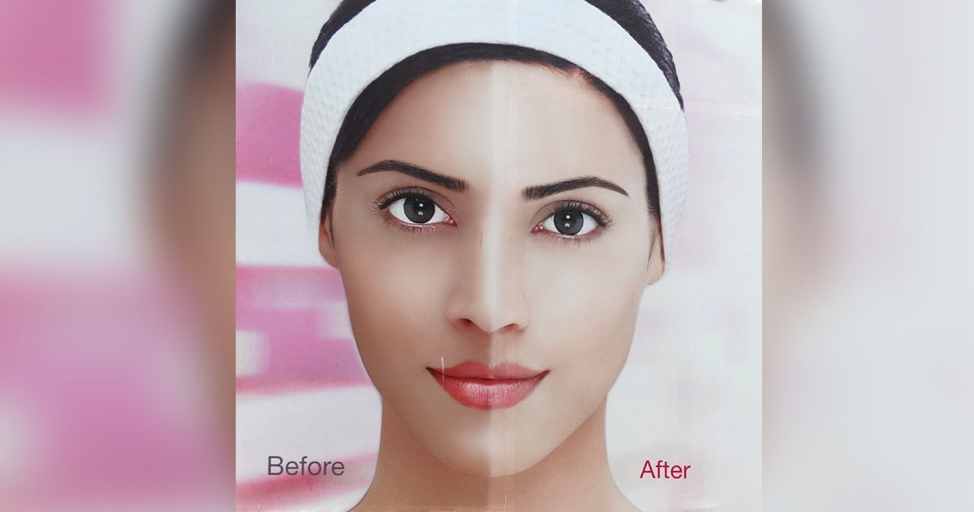 A pale complexion is considered a beauty ideal in South Asia – where the majority of citizens are dark-skinned from living near the equator.

For years, beauty companies have marketed whitening creams, scrubs, pills, injections, and even IV drips to Asian consumers. When questioned, companies typically claim that they are simply responding to popular demand.

Advertisements from brands as recognizable as Garnier, by L’Oreal, have promised that skin lightening will help women find jobs, husbands, and other variants of happiness. That is, until recently.

In late June 2020, due to public criticism, L’Oreal declared that they would scrap the words “white”, “fairness”, and “light” from their range of skin products. This change was particularly directed at their Garnier line, which was broadly marketed throughout South Asia as a collection of skin whitening products.

In the same month, Johnson & Johnson announced that they would end two lines of skin lightening products, which had been popular in Asian countries.

Unilever, the parent company of the popular skincare brand Fair & Lovely, also proclaimed that all of their skincare products would remove the terms “fairness”, “whitening”, and “lightning.” The Fair & Lovely brand itself vowed to take on a new title: ‘Glow & Lovely.’

The change came at a time when the company was facing a widespread demand to pull Fair & Lovely products from shelves entirely. Social media posts were also denouncing Unilever CEO Alan Jope for speaking out against systemic racism while continuing to promote and sell the wildly profitable £256m-a-year line.

The Origins of Colorism

This backlash is often accompanied by the term ‘colorism,’ referring to a type of discrimination favoring fair-skinned people of the same ethnic group.

In India, colorism is often considered a remnant of colonialism. It hearkens to a time when English invaders conquered the nation and treated it’s natives as second-class citizens, setting the beauty standards for decades to come. The pale-skinned image is wrapped up in notions involving wealth and class.

The lives of Indians are often strictly defined by the caste system, a stratified social hierarchy that determines everything from marriage customs to beauty standards. While fair complexions are identified with colonialist powers and a lifestyle of privilege, dark complexions are almost considered dirty and associated with hard labor.

Bollywood movies have a record of casting Caucasian characters, such as British individuals, as villains. This is particularly true of movies involving the nation’s colonialist history, such as the seminal 2001 movie Lagaan.

Yet the Bollywood stars themselves are often of a relatively fair complexion.

These casting choices suggest that while Indian audiences still resent foreign powers for past injustices, they’ve absorbed the value systems impressed upon them by their former rulers.

In 2014, Nina Davuluri made history by being the first Indian-American woman to win the Miss America pageant. Commentators speculated that although America had become tolerant enough to let a brown-skinned candidate win a major beauty pageant, the same wasn’t necessarily true of India.

Journalists such as Anna John and Lakshmi Chaudhry wrote that Davaluri’s complexion was too dark to suit the beauty standards of her parents’ native land.

The Hunt for a Spouse

The consequences of this prejudice can be observed in Indian customs surrounding marriage. One study on Indian arranged marriages discovered that dark-skinned marriage candidates were ranked lower in preference by prospective mothers-in-law, relative to their fair-skinned counterparts.

Recently, a Netflix reality series called Indian Matchmaking incited controversy after its protagonist (a woman who tracks down possible spouses for her clients) championed lighter-skinned candidates as more desirable.

Discrimination is Not Limited to Traditional Matchmaking

Indian marriage websites have blatantly brought these practices into an online forum. A Seattle University study by Sonora Jha and Mara Adelman claimed that the likelihood of a dark-skinned Indian woman finding a partner online was “nonexistent”.

One famous matrimonial website, shaadi.com, allegedly asked its users to rate their skin tone using a range of descriptions, including “fair,” “wheatish,” and “dusky.”

The site then permitted users to select their preferences in a potential mate, with skin tone as one of the filtered categories. The director of marketing for the website claimed that the service was simply trying to replicate the tendencies of newspaper advertisements.

The company eventually abandoned the service of providing search results based on skin tone specifications. Nonetheless, the user interface for choosing a skin tone remained on shaadi.com, up until a petition was launched to take the filter down. The creator of the petition claimed that within 24 hours, the campaign had received 1,500 signatures. Consequently, shaadi.com finally got rid of the filter.

In the Western world, consumers have long been campaigning for change when it comes to a lack of inclusiveness from beauty companies. Brands releasing products appealing to fairer skin tones, such as the 2018 Tarte Cosmetics line of foundations, or the 2019 Givenchy line, are met with boycotts and outrage. On the other side of the globe, however, skin lightening is a common procedure.

A World Health Organization (WHO) study found that 40% of Chinese women use skin-lightening creams on the regularly. That value is 61% in India, and 77% in Nigeria. In South Asia, over half of the skincare products are sold with the intention of whitening the skin.

This colorism prejudice can have a damaging long term impact on mental health. One study found a correlation between symptoms of depression and prejudices against darker complexions among Asian-American women. In 2014, 2018, and 2019, Indian women killed themselves after being bullied and taunted for their dark skin tones. Cynthia Sims, of Southern Illinois University, discovered a significant gap in career opportunities between light and dark-skinned Indian women.

The discrimination is not limited to Asian women, either: A famous 2011 American study found that light-skinned black women obtain shorter prison sentences than dark-skinned black women. Another 2015 study revealed that white interviewers viewed light-skinned black and Hispanic job candidates as more intelligent than darker-skinned applicants with identical qualifications. Clearly, dark-complexioned individuals may find themselves under heavy pressure to use skin lightening products to increase their dating and career prospects.

Unfortunately, there’s a strong possibility of consumers getting poisoned by illegal skin whitening products. Though the aforementioned companies such as Unilever and Olay offer legal product lines, off-brand cheap alternatives are common in Asia and Africa. Internet forums may advertise these products with images of sullen dark-skinned ‘before’ photos, followed by luminescent ‘after’ photos.

Consumers of these products may find themselves with full-body rashes, or end up in the hospital. These ultra-cheap creams are frequently laden with mercury, a notoriously toxic metal, as well as corticosteroids and hydroquinone. With prolonged use, these substances are associated with:

The Pushback is Under Way

Trade inspectors, regulatory agencies, and police task forces try to combat the sale of these harmful, illegal products. Activists place pressure on beauty companies to withdraw their whitening product lines or at least change the labeling. Social media groups form anti-colorism campaigns, such as #brownisbeautiful. These efforts don’t amount to nothing – the changes in beauty marketing in the past year reflect the shifting tide of public opinion.

This year, when questioned about its skin whitening line, an Olay spokesperson insisted that it was the consumers’ “choice” to define pale skin as beautiful. The response relies on corporations’ age-old argument: that they are merely catering to consumer demand and popular standards of desirability. But who defines the popular standards? How did consumers come to demand these products? Ultimately, who really profits from catering to colorism?