Prison Radio Show is Inmates’ Link to the Outside World

By HOLLY HEINRICH November 28, 2020 No Comments 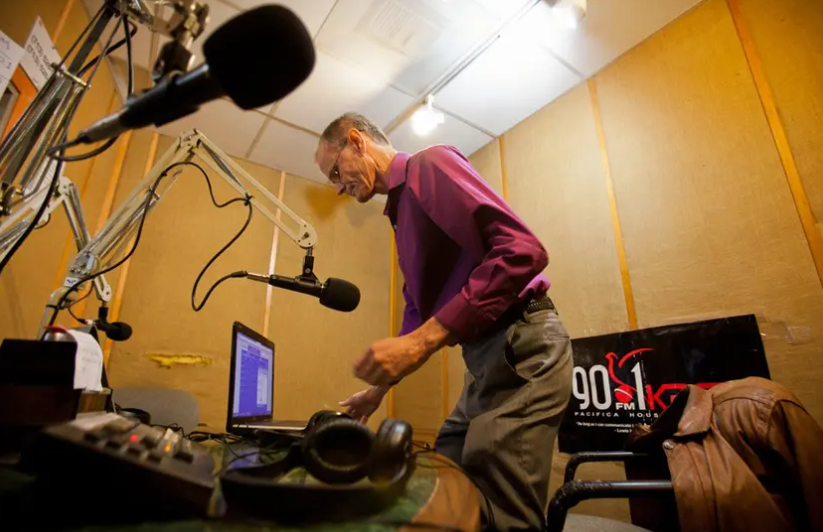 “Prison Radio Show is Inmates’ Link to the Outside World” was first published by The Texas Tribune, a nonprofit, nonpartisan media organization that informs Texans — and engages with them — about public policy, politics, government and statewide issues.

On Friday nights, in prison cells across East and Southeast Texas, a window opens to the outside world. For two hours, a Houston-based radio show breaks the isolation of the incarcerated, linking inmates to families, friends and life outside lockup.

“The Prison Show,” which started in 1980 on KPFT, is part news program and part call-in radio show. Some Texas inmates have listened to their own weddings on the show, with the new spouse and a proxy exchanging vows in the studio. Others have listened to their children grow up on the radio, hearing news of soccer games and report cards from children they never see.

And for inmates who are no longer in prison, the show is familiar in a world that feels foreign.

“Most incarcerated people don’t feel like a part of any other world,” said Ray Hill, the show’s creator and a former inmate. “The Prison Show” connects inmates to life outside prison walls “in the hope they will develop a sense of belonging to the world they will ultimately return to,” he added.

The show is run by volunteers, most of whom have personal ties to the prison system. Many are former inmates who found a sense of purpose there. Others are inmates’ relatives, and for them the show provides a sense of community.

“It’s the only time in the week when I’m around people who make me feel absolutely comfortable,” said Storey Jones, a law student whose husband is in prison. “People look at you differently when they find out you’re married to an inmate. It’s hard to find support.”

But it is the call-in hour that draws most listeners. It began in 1980 when Hill learned that inmates could not make phone calls from prison. He later lobbied the Legislature to allow most inmates to call relatives, which became law in 2007.

Three teenage sisters have regularly visited the studio on Friday nights since they were little girls. They come to talk so that their father, who is serving life in prison, can listen. For about 10 years now, the youngest has said goodbye by singing “You Are My Sunshine.” Such on-air expressions of affection — for convicted murderers, robbers and gang leaders — can be bittersweet.

But what surprises many outsiders are the proxy weddings performed on the show, usually involving free women who marry incarcerated men.

Ann Staggs, the proxy-wedding coordinator, was the show’s first bride. She met her husband while she was a prison nurse, and later lost her job and visitation rights when her supervisors discovered their relationship.

The couple were married on “The Prison Show” in a ceremony complete with a minister, a wedding cake and the bride’s family. Hill stood in for the groom as he listened from his cell. Staggs was unable to visit her husband for more than a year after their wedding; as a former employee, she was considered a security risk until he was transferred to another unit.

The show’s limited radio signal reaches only one-sixth of Texas prisoners. But for those within its reach, it holds together lives they left when they entered prison.

“We simply want them to maintain an outside support system,” Hill said. “Without a support system, when they walk out those doors, they’re going to fall back into the problems that brought them there in the first place.”