Fear on the front: Health workers adapt and brace for surge 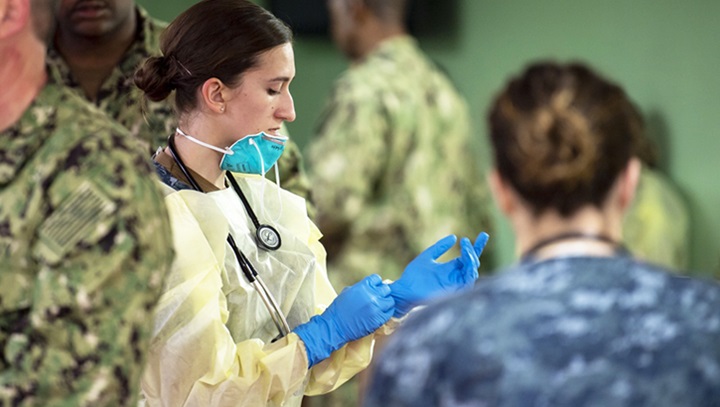 These are just some of the changes, large and small, that health care providers in North Carolina have been making over the past weeks as they prepare for the surge of patients infected with COVID-19 who are only now starting to have symptoms that will land them in doctors’ offices and hospitals in coming weeks.

As of this Sunday evening, North Carolina had more than 260 people hospitalized across the state as a result of COVID-19 infections. Just 20 days before, the state had only one.

Those hospitalizations, the demand on resources, is only going to grow in the coming days. And health care providers have been looking around the country to the flood of cases filling emergency departments and intensive care units, they’re calling friends, colleagues and former classmates asking them about their lives amidst the surge.

“Today for the first time in my life I wrote the same exact diagnosis in 15 different charts in a row. ‘Covid-19 pneumonia. Acute hypoxemic respiratory failure’,” Tina Goloborodko, an internist and medical professor at Montefiore Hospital in the Bronx, N.Y. (and a classmate to this reporter) wrote on Facebook on April 1. “There were 17 patients signed out to me last night, but only 15 were there this morning … Same diagnosis, but such different stories and different fates.”

Providers are reading stories like the one posted on April 1 on Medscape, a main news source for providers, that consisted of only the names of more than 100 medical personnel from around the world who have died after treating COVID-19 patients.

And they’re making significant changes to their lives in preparation for the coming flood.

Providing care for any patient is an intimate act that doesn’t allow for social distancing.

Physicians, nurses and nursing aides are within a foot or two of patients’ faces as they start intravenous lines, take blood and provide medications. They sometimes have to lean over patients to position them in bed, pulling and rolling them, exposed to urine, feces and other bodily fluids.

If a patient requires intubation in order to be put on a breathing machine, a tube is placed down the patient’s throat, providing a direct, open airway to lungs riddled with virus-laced sputum. One cough and viral droplets become airborne.

When each of the interviewees in this story was asked what other members of society could do help them, they each said the same thing: “Stay at home.”

“You do have to suction those patients frequently,” said Dennis Taylor, a critical care nurse who is also the president of the North Carolina Nurses Association. “Not only the ventilator circuit, the suction canisters, containers, tubing, everything they touch, all those could be potentially infected with the virus.

“It does raise your level of sensitivity.”

He said that ventilators are only one potential vehicle for a health care worker to be exposed to coronavirus coming off of patients.

“Anyone who’s on a ventilator also needs to have daily mouth care done,” Taylor said. “Typically we use Chlorhexidine to swab out someone’s mouth around the tracheal tube and then we use another suction catheter to suction that out of the mouth.

“It’s just another potential site of exposure which you may have as well, which would be the saliva, the spit that the body naturally produces.”

During the SARS epidemic in 2003, about a fifth of all cases globally were among health care workers. Some evidence from the current pandemic points to the idea that health care workers might be more affected by the virus because they’re exposed to a higher “viral load” at the onset of the infection.

That’s part of the reason why health care workers are so worried about the lack of N95 masks, which can protect them from COVID-19. The now well-known shortage of personal protective gear weighs on these providers who are now being told to wear such equipment for the entirety of their 8, 10 or 12-hour shifts.

But even when PPE is correctly worn, the removal, or doffing, of the coverings has to be done just right or a worker can be exposed.

Ideally, when a health care worker is removing their PPE, a colleague monitors them to see that they have not contaminated themselves.

[The monitor is] “making sure that if you do do something out of order, or you forget to wash your hands or whatever, that they will stop you before you get into a place where you’re about to contaminate yourself,” said Brad Drummond, a pulmonologist at UNC Health in Chapel Hill. “Having that monitor is a key step in this and you know, we get concerned that when we’re, if we’re in a surge capacity standpoint, that we may not have one person who can just stand there.”

One of the most profound learnings to come out of Italy was how medical workers there had not been adequately trained in putting on and taking off personal protective equipment, leading to many becoming exposed.

PPE was the biggest concern the NC Nurses Association found in a survey of nurses they conducted over the past few weeks. Taylor presented the results of the survey to lawmakers last week during a meeting of the working group organized to look at legislative responses to the health care issues raised by COVID-19.

“There is not enough PPE for front line nursing staff,” wrote one survey respondent, according to Taylor. “I am not comfortable with the measures hospital organizations are taking with their own healthcare professionals, going against decades of what we have been taught in evidence-based infection control practice.”

“We are risking our lives to serve our patients,” wrote another. “Yes, we signed up for this, but we signed up under the assumption that we would have PPE supplies to protect ourselves so that we can protect our families and patients.”

Stories abound of health care workers taking extra precautions at the end of their shifts. Drummond said UNC had provided scrubs for him to wear at the hospital and send to the laundry at the end of his shift.

“There’s anecdotal things that other people are doing … changing in the garage of their house when they get home and not bringing their shoes in,”  Drummond said. “It’s important that the clothing that you’re wearing when you’re in these health care encounters doesn’t leave the hospital.”

“My partner and I both work in the emergency department. I am an ER physician, and she’s an ER nurse,” said Gloria Tsan, who works at a hospital in Charlotte which she asked not be named.

“That makes me really sad that I, you know, can’t see him every day and be with him every day. We still talk on the phone,” she said. “Then we’ll have little meetup dates that are, you know, social distancing, you know, it’s hard for me to not be able to give him a hug or a kiss on the cheek. Or just have him, you know, cozy up to me on the couch.”

She and her partner have also talked about what to do if one of them were to fall ill with the disease.

“We’d sort of self-quarantine even within our own house, one person sleeping upstairs, one person sleeping downstairs,” she said. “I have other colleagues that are already doing this in their house, they’ve got the whole rest of the family with the kids sleeping in one part of the house.”

At least one of her colleagues, she said, had made the decision to stay in a tent behind the house to protect his family.

And media reports indicate an emergency room physician in Alamance County has been staying in a recreational vehicle outside his home. He was able to get the RV through a new Facebook group that allows owners to loan their vehicles to providers to stay in to keep their families isolated from any disease they might be bringing home. The group was launched only two weeks ago but already has 20,000 followers.

The Article was originally published on Fear on the front: Health workers adapt and brace for surge.