One year in, Gates-funded networks of schools are getting off the ground — and more are on the way

By Camille Respess September 11, 2020 No Comments 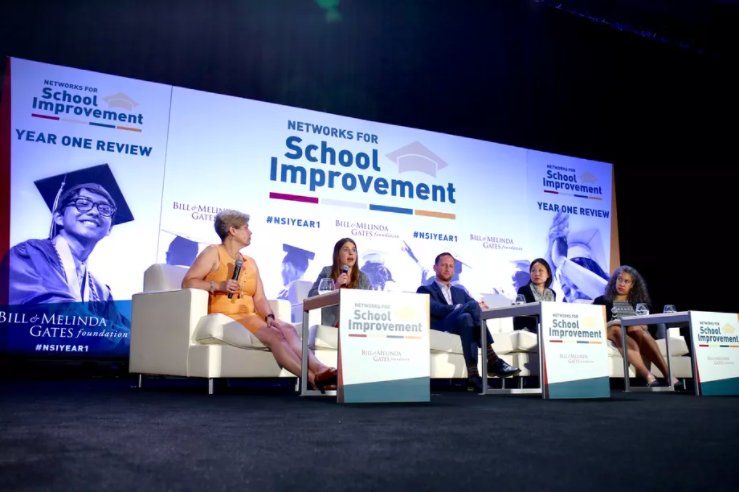 Baltimore’s school leaders have a clear goal: to improve their eighth and ninth-graders’ reading and writing skills. They also have $11 million from the Gates Foundation to help do it.

Figuring out exactly what to do, though, has been a messy, ongoing process. And that’s by design, they say. One of the 14 schools working on the issue took four or five meetings to decide what to try and how teachers would track improvement and make adjustments, a Baltimore principal said this week.

“Teachers had to come to the table and say, ‘Yeah, I’m not so great at this,’” said Kamala Carnes, principal of Briscoe Academy, at a Gates Foundation event. “Even as a leader, it was a lot of hard work, and we really had to dig deep to figure out what the problem was and come up with the solution.”

Baltimore’s work is one piece of a larger effort the Bill and Melinda Gates Foundation launched one year ago to improve schools by grouping them together to solve common problems, with an emphasis on helping black, Hispanic, and low-income students succeed. The foundation has already given $93 million in grants to 21 nonprofits coordinating the networks, and Gates said it will announce at least 12 more grants in the coming months.

At the event earlier this week, participants in networks from California to Philadelphia offered a first assessment of their progress. (The Gates Foundation is a funder of Chalkbeat.) Baltimore served as an example of the complications that can come with giving more power to schools to design improvement efforts — and the optimism that leaders have about the “continuous improvement” work eventually helping more schools.

“I need 170 schools that can serve the young people of Baltimore City in a way that the continuous improvement cycle is realized in their results, and realized in how they view the world,” Baltimore City Public Schools CEO Sonja Santelises said.

Gates offered little data about whether the effort has shown early success. In a report released Tuesday, the foundation said it expects to publish research from Columbia University reviewing the initiative’s first year later in 2019. Student progress data, it said, will be available in the next three years.

By sharing what works, and letting schools take the lead, Gates officials say they hope the effort will offer roadmaps for schools elsewhere.

“We’ve recognized that education research needs to address more directly the questions and problems that matter most to these practitioners,” the Gates report said. “Even the best research typically needs to be translated into tools and practices that teachers and principals can use.”

That’s part of an ongoing shift for the foundation, which is among the biggest players in U.S. education philanthropy. Many of the organization’s past efforts, including breaking up high schools into new, small schools; an overhaul of teacher evaluations; and the expansion of charter schools have faced stiff resistance from some educators.

Perhaps cognizant of this perception, the foundation featured participants who said the latest effort has emerged from the ground up.

“The power of this work is really trusting the wisdom of practitioners and what’s happening inside of schools and building off of the understanding practitioners have of what is going on,” said Jenny Nagaoka, deputy director of the University of Chicago’s consortium on school research, during one panel discussion about measuring success.

There’s no indication that Gates’ latest effort has driven the sort of backlash that past approaches have.

Still, the foundation acknowledged that the continuous improvement model it has adopted might not prove effective — but argued it is important to try.

“Maybe in our goal to get flexible schools where working conditions makes sense and we can respond flexibly to the needs of teachers, it isn’t the right strategy,” said Bob Hughes, the foundation’s K-12 education director. “We have to take that risk, and we have to acknowledge that up front: that it may not work in every circumstance and every problem.”

The Article was originally published on One year in, Gates-funded networks of schools are getting off the ground — and more are on the way.